The 48,045 dwt FS Sincerity became the 2000th tanker to be moored to the Single Point Mooring (SPM) at Mossel Bay in the Southern Cape during May, when she discharged 25,000 metric tonnes for PetroSA.

The harbour is draft restricted hence the establishment of two offshore moorings; in 1992, the SPM, situated 1.5 nautical miles offshore of Voorbaai in a water depth of 20 metres and, in 1959, the Conventional Buoy Mooring (CBM), situated 1000 metres inshore of the SPM. The two Mossel Bay offshore moorings are managed and maintained by AMSOL on behalf of PetroSA.

The SPM is used for the export of petroleum products (petrol, diesel and kerosene) to other South African ports, particularly Port Elizabeth and East London. It is also used for the import of diesel, condensate and reformate which is processed by PetroSA for local distribution and export. The petroleum products are pumped to and from the tank farm at Voorbaai via a subsea pipeline from tankers moored at the SPM and, from Voorbaai, overland to and from the PetroSA refinery.

The SPM is known as a Catenary Anchor Leg Mooring or CALM type and was developed by Imodco and Shell. It is designed for use in shallow and relatively calm waters, although some have been installed in deeper water. The Mossel Bay SPM was last dry docked in October 2017 at the Port of Mossel Bay for a complete refurbishment which involved bringing a large heavy-duty crane to lift the 200-tonne plus buoy from the water. After completion of the refit, the buoy was returned to its mooring offshore.

AMSOL provides each tanker calling at the SPM and CBM with a team consisting of a Loading Master and three divers, who stay on board the tanker until all cargo operations and documentation are completed. A close watch is kept on the sea and weather conditions throughout the loading and discharge operations, ensuring a safe operation with no impact on the environment.

The Loading Master also assists the Master and TNPA pilot with mooring operations, with TNPA’s vessels Arctic Tern and Snipe providing assistance for tankers mooring at the SPM and CBM. AMSOL’s buoy tender vessel Sisonke conducts static towing whilst the tanker is moored to the SPM. The vessel is also used for dive support during maintenance operations

PetroSA appoints surveyors to conduct sampling, ullaging and confirm calculations of the products loaded and discharged, and owners appoint shipping agents, most of whom are locally based, to facilitate the arrival and departure of the tankers scheduled to call at Mossel Bay.

Interestingly, the coastal tanker Breede, which had the honour of being the 1000th tanker at the SPM nine years ago on 29 May 2010, narrowly missed being the 2000th and called at the SPM  to load product for East London. She was built in China for Unicorn Tankers and flies the Singapore flag. She has a predominantly South African crew and has been a regular caller at Mossel Bay since 2009.

ENVIRONMENT AT THE HEART OF PARTNERSHIP 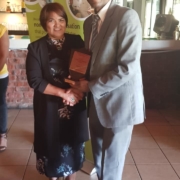 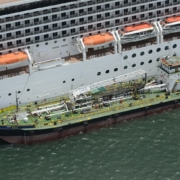 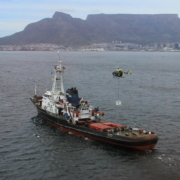 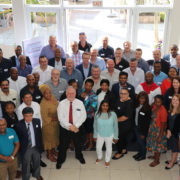 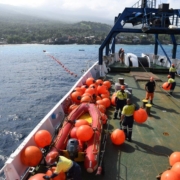