In prioritizing a sustainable talent pipeline, AMSOL works in close partnership with many high schools across South Africa to support maritime education and awareness. Experiential opportunities to sail on AMSOL vessels are very special because of the effort that AMSOL seafarers make to bring a career at sea to life during voyages!

Four learners from Lawhill Maritime Centre in Simon’s Town were recently given the opportunity to sail with Captain Ian Merriman, Officers and Crew on the AMSOL standby salvage tug for a short voyage to Cape Town. The learners were all Grade 11 students who after being kitted out with PPE (Personal Protective Equipment) joined the tug in Simon’s Town. Lawhill Maritime Centre is a school of excellence in Maritime Economics and Nautical Science, offered to students from all over South Africa who board at the school for Grades 10 to 12.

Said Olwethu Maneli, “It was nice to plot on the chart. We finally did everything that we were taught in class practically and that really increased my interest to become a marine navigator.” According to Siphuxolo Mhlaba, the advice and information shared by those on board was invaluable: “Thanks to the entire crew. You really made my first sea trip an unforgettable experience!” On completion of the voyage, Fikekahle Dlamini expressed his excitement: “I hope these kinds of opportunities will again be opened, for people just like us, who are interested in the maritime industry to gain experience”.

But its Siphelele Ncube who has the last word: “It was an adventure to remember forever and ever!” 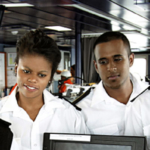