Two of AMSOL’s vessels have been utilized on a number of operations in the past few months that have highlighted the value of experienced Masters, Officers and Crew and suitable assets in providing immediate response. Their activity highlights the versatility required to ensure that marine risks are managed in collaboration with relevant Authorities.

September: The ‘SA Amandla’ connected to the immobilised container vessel ‘MSC Katrina’ south of Cape Agulhas on the 7th of September and towed the vessel to Durban before returning to Cape Town.

The ‘Umkhuseli’ under Captain Tshepo Serero arrived in Algoa Bay on the 17th of September. After a short port call, the tug departed Gqeberha to assist the immobilized tanker ‘Energy Centaur’ off of the Cape South coast. A connection was made and tug and tow proceeded to Cape Town where they safely arrived on the 22nd of September.

October: The ‘SA Amandla’ sailed from Cape Town bound for the immobilised bulk carrier ‘Kiran Europe’ off Plettenberg Bay to connect and tow her to Cape Town. A connection was made on the 28th of October and tug and tow proceeded to the Port of Cape Town.

In late October off Durban, the ‘Umkhuseli’ under Captain Simon Radebe stood by the ‘NS Qingdao’ and provided offshore safety standby and support services following an onboard fire; later escorting the vessel to St Helena Bay. She continues to provide essential offshore support to the salvage team involved in this operation.

November: On the 11th of November the ‘SA Amandla’ under Captain Russel Duse took the container vessel ‘MSC Trieste‘ under tow off of Plettenberg Bay and towed her to Saldanha Bay for repairs, during which the tug stood by. 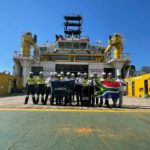 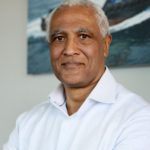 FROM THE CEO’S DESK
Scroll to top