Historically, approximately 17 million tons of crude oil has been transferred from the Single Point Mooring (SPM) terminal through a pipeline to refineries, making the offshore terminal a key component in the petrochemical value chain. This remains the case despite changing supply and demand dynamics in the Energy sector.

Maintenance interventions by AMSOL on the SPM in 2020 and 2021 included the replacement of all 8 anchor legs of the mooring system. AMSOL was contracted to provide engineering, procurement and construction services for the 2022 replacement of the 70m long North and South subsea hoses at the SPM during a scheduled outage period.

The hoses were to be replaced one at a time, to ensure that the SPM could be brought back into service immediately should an emergency occur.

The water depth at the SPM is 48m, and to ensure diving safety the work at the Pipeline End Manifold (PLEM) had to be executed using saturation diving techniques.  Surface diving work under the SPM was carried out by SCUBA-replacement diving, using AMSOL standard operating procedures and dive team.  The Shell Diving Centre of Excellence provided diving safety assurance for the duration; an example of the great partnership and collaboration by all parties during the project

SAPREF also required that AMSOL design and fabricate new steel hose spools for the connection of the subsea hoses to the SPM and the PLEM. The spools were built by EPCM Bonisana – a Level 1 BBBEE compliant engineering company based in Gauteng.  Production assurance was provided by independent inspection authorities to ensure that the hose spools were built to the highest international standards.

To ensure optimised communication and integration between offshore teams, the DP2 Diving Support Vessel ‘Mermaid Endurer’ was chartered for the project.  The vessel was able to accommodate 109 offshore project personnel, including the AMSOL project management and SBM Operations team, the Client and representatives from the Shell Diving Centre of Excellence.  The AMSOL support vessels ‘Siyanda’, ‘Siyakhula’ and ‘Sibanye’ attended to the project with vessel crew and daily supply runs out of the Port of Durban.

AMSOL’s Executive: Terminals, Subsea and Harbour Towage Norman Jensen: “The unexpected storms, recent flooding and adverse metoocean conditions in Durban caused delays but the team rallied and managed to make up for lost time to ensure that the project was completed successfully, on time and within budget. Another great example of team work to high international standards.”

After months of planning and collaboration, the project was safely and successfully concluded in early June. 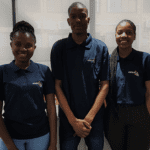