Protecting the Southern African coastline by responding to marine emergencies is the job of the legendary tug ‘S.A. Amandla’. In partnership with the South African Department of Transport (DOT) and the South African Maritime Safety Authority (SAMSA), AMSOL provides this essential service to the maritime sector.

A number of recent emergency response operations undertaken by the highly experienced Master, Officers and Crew onboard the ‘S.A. Amandla’ highlight the necessity of the standby tug.

The ‘S.A. Amandla’ spent the entire month of September and most of October on safety standby with the immobilised bulk carrier ‘Roberto Rizzo’ in Algoa Bay, effectively mitigating risks to the South African marine environment. The bulk carrier, which needed repairs, was towed by a third party tug out of Algoa Bay to a repair port in the east on the 25th of October as her draft was too deep to enter a South African repair port.

On the 3rd of October AMSOL was advised that the general cargo vessel ‘Denny Z’ was experiencing engine problems and drifting towards the shore between Durban and Richards Bay.  As the ‘SA Amandla’ was in Port Elizabeth and would not have reached the casualty in time, AMSOL facilitated the release of the Durban based tug ‘Siyanda’ under Captain Dawie Erasmus to be on standby until she passed out of South African territorial waters.

The ‘S.A. Amandla’ proceeded to Durban on the 25th of October to tow the Southern African Shipyards floating dock ‘SAS Dock 1’ to East London to be used in a multi-million rand Transnet National Ports Authority (TNPA) dry dock caisson gate refurbishment project.  The ‘SAS Dock 1’ was safely delivered to East London by the tug on the 10th of November.

The tug arrived back in Cape Town on the 12th of November and on the 13th  was again mobilized from Cape Town to the assistance of the tanker ‘Sea Frost’, which was disabled in a position 60 nautical miles north west of Cape Town.  The ‘SA Amandla’ reached her later that day towed her back to Cape Town where the casualty was safely delivered to port authorities on the 15 November. 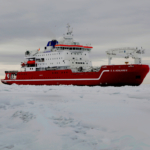 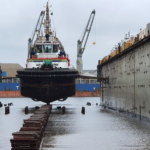